In Egypt: Muslims leave Dahshur in ruins beyond repair

In Dahshur: Ruin beyond repair

The Giza town of Dahshur was designated by UNESCO as a World Heritage Site in 1979, since it is home to five of the most famous pyramids of ancient Egypt. Today, and thanks to the recent vicious attack against the town Copts, Dahshur is a place of total ruin. It has fallen from the peak of civilisation to the trough of sectarianism, all because of a Muslim’s shirt that got burnt in a laundry owned by a Copt. The verbal fight that ensued escalated, in what amounted to collective punishment of all the Copts in town, into an all-out attack against the Copts, their homes and businesses. Some 120 Coptic families were obliged to leave town hurriedly for fear of their lives. What followed was a three-day spree of looting and ruining the Copts’ homes and businesses.

The incident spurred denouncement statements by activists and calls for justice. Officials, major among whom was Interior Minister Major General Ahmed Gamal Eddin and Giza governor Ali Abdel-Rahamn rushed to hold meetings with acting patriarch Anba Pachomeus and Giza bishop Anba Theodosius in an attempt to resolve the crisis. The universal demand was that the Copts should be afforded the security to go back home, and should be compensated for their losses, in order for them to be able to rebuild their homes and restart their businesses from scratch. 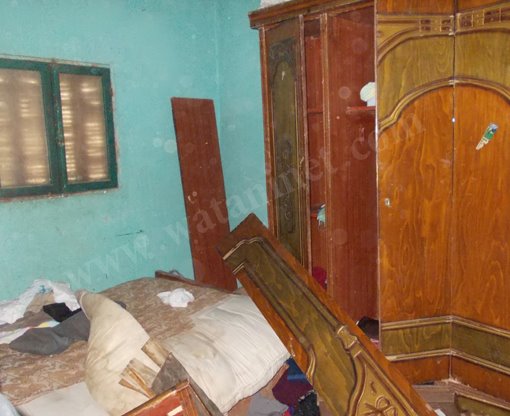 The allegation that the Copts of Dahshur were forcefully evicted from their home town was especially galling to Muslim officials; it depicted in a nutshell the scale of injustice inflicted upon the Copts and the size of the official incapacity or, worse, nonchalance. An official decision was thus taken to secure the return of the Copts to their homes, with a EGP10,000 sum to each family in compensation. Last Wednesday, the first batch of 20 Coptic families went back home.

Watani accompanied some families on their return journe.y.  The Muslim neighbours were there to welcome the Copts home in sincere joy. But the joy was dipped in bitterness; the almost incredible scale of the ruin inflicted on the Copts’ homes made their homecoming as that of birds flying happily back to their warm nests, only to have their wings broken on the way.

As soon as he arrived home, Ayyad Mansour Ayyad, 37 years, who works as a non-regular labourer discovered that the gold jewellery of his wife had all been stolen. His house was looted and shattered; all what remained for him was a butane cylinder and a set of kitchen utensils which his Muslim neighbour Tareq Abu-Ahmed had managed to salvage. Abu-Hamed warmly welcomed Ayad, and rushed to fix the electric wiring in his home, which had been damaged by the attackers. He told Watani that Dahshur was the best town in the world! And that his Coptic neighbours are so dear to him. He said he could not imagine his life without his Coptic neighbours, the brothers Ayyad, Ayman and Wadie.

Watani left Ayyad lamenting his losses and went with his brother Ayman who lives in a rented room that was totally ruined. Ayman’s problem is that, as is the custom in many rural areas, he rents the room upon verbal agreement with the owner; he has no contract or any written document to prove that. Accordingly, Ayman was not eligible to the EGP10,000 in compensation handed by Giza governorate.

Wadie Naeem was among the few lucky ones; his Muslim neigbhours were able to protect his house except for the glass windows which were broken. His motor bicycle, which he had parked in the street in front of his house, was destroyed.

A heap of rubble

The destruction in al-Nassara (the Christian’s) Street was beyond imagination. The grieving voice of the jeweller Sabry Saad lamented: “What did I do to have my home and shop in ruins? I was no party to any dispute. My losses exceed half-a-million Pounds. All the electric utilities were ruined; the apartment of my son who was getting married shortly and was thus furnishing it, was completely looted and some EGP52,000 which were to be used for the remaining furniture and the wedding, stolen.”

“We returned to town in the protection of the security forces; but where were they when our houses were looted and plundered? All the furniture and utilities were stolen. Nothing is left for us. What could not be carried away was smashed. Even the children’s toys, the pictures on the walls, and the bathrooms have all been ruined. We’ve come home to nothing but a heap of rubble. It was like a Mongol war!” Saad’s Muslim neighbour Mohamed Abu-Gouda tightly embraced him Saad tightly to offer some comfort, but even he had nothing to say but: “The devil himself could not have worked all that evil.”

More and more laments and tears. Will the heartache ever cease? An old woman took us to look into her son, Hany Farag’s, home. Farag’s house was entirely destroyed; it was as though all his belongings had been put into a crusher and the rubble strewed on the floor. Farag bitterly mocked the meagre compensation: “The sum is barely enough for us to buy a cooker and a refrigerator,” he said. “But who will pay for the removal of the rubble, rebuilding the walls, or refurnishing the house with the bare essentials. Will the EGP10,000 restore to our children the security they so wickedly lost? Even their piggy-banks and notebooks were smashed.  Who can think we can close our eyes and sleep amid the rubble of our once-so-beautiful, warm home? That ‘compensation’ sum was decided simply to give officials a feel-good sentiment about the whole thing. It will probably make them sleep well, that’s all.”

“Not among the ruins”

So many questions can find no answers in Dahshur where it took three full days for men to work evil deeds against their fellow townspeople, and all in the name of religion. Months and years will not be sufficient to obliterate the bad memories engraved in the minds and hearts of the Dahshur Copts. The efforts of officials to show sympathy may have done something to help but, unfortunately, this was not always the case. Major General Ahmed Abdel-Rehim, head of the town and district of Badrashein to which Dahshur belongs, paid a visit to Dahshur to welcome the Copts home. When Sabri Saad, however, asked him to have a look at his ruined home, Major General Abdel-Rehim adamantly declined, insisting: “I came to welcome the families home not to be photographed among the ruins.” On another hand, Anba Theodosius denied rumours that Fr Takla Baqi of Mar-Girgis church in Dahshur had been moved to serve in another village. He affirmed that Fr Takla is still serving at Mar-Girgis’s, and that a new priest, Fr Pachomeus, had been appointed to assist him.